From the Palette … to the Table 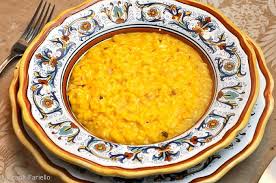 Rice is an ingredient seen in cuisines throughout the world, but risotto is a preparation specifically Italian, although it too has spread throughout the world.  While Italians are quite proud of their extensive cuisine, one of their most famous dishes is Risotto alla Milanese — not only for its exquisite flavor, but also because of the legends that surround the dish and also because of the saffron that Italy is known for.

According to an early legend, the roots of Risotto alla Milanese date back to the traditions of Medieval Kosher cuisine.  In fact, it is possible to find in libraries the recipe for riso allo zafferano (saffron rice), the forefather of the Milanese risotto. It was probably exported from Sicily and reached northern Italy thanks to the help of Jewish merchants.

Sicily also is the homeland of Risotto allo Zafferano in another legend.  A Sicilian chef who moved to Milan decided to prepare the famous Sicilian Arancini (stuffed rice balls, which are breaded and fried). However, not finding all the ingredients necessary for the stuffing, she made do with a slightly different version. And thus was born the first saffron yellow risotto.

But the most well-known legend on the origins of Risotto alla Milanese is found in a document at the Trivulziana Library in Milan.  According to the manuscript, the Milanese dish was “born” in 1574 during the wedding festivities of the daughter of Mastro Valerio of Flanders, a Flemish painter who at the time was working on the glass windows of the Duomo of Milan.  According to sources, Mastro Valerio had an assistant

called “Zafferano,” who was in the habit of mixing a little saffron spice into his colors in order to make them livelier.  During the wedding of Valerio’s daughter, the mania of Zafferano passed from the painter’s palette to the table.  Perhaps just for fun, the assistant negotiated with the cook to add a little saffron to the risotto, which, at that time, was served only with butter.  The reaction of the guests was surprising.  Besides adding an exquisite flavor to the dish, the saffron made the dish the color of gold, a symbol of wealth and prosperity.  From that day on, the yellow-colored risotto became one of the most fashionable dishes of the period, traveling from osterie to taverne throughout Milan and then throughout Italy far and wide.

Saffron is an ancient plant that originally came from the Middle East although it is also mentioned in Medieval Italian documents.  In those times it was so precious that it was used as a bargaining chip, like cattle and land.  Saffron is so expensive today, about

3.000 euros a kilo ($1,680 per pound– or about $130 per ounce), that it is often kept under lock and key at grocery stores.  It can only be picked by hand, and the right pistils have to be chosen by humans. Only the golden crimson ones can be used, and 200 of them are needed to produce a single gram.

Italy today is home to the best saffron in the world, produced in the valleys between Abruzzo and Tuscany.  Throughout Italy there are many products and recipes that contain saffron, including Tuscany’s saffron honey, Sicily’s pecorino called Piacentinu Ennese DOP, and, of course, the legendary Risotto alla Milanese. 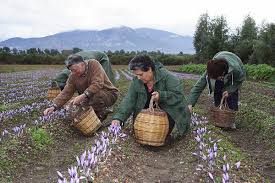 2 Responses to From the Palette … to the Table