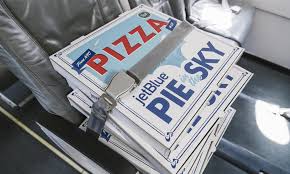 An English language idiom, “pie in the sky” refers to a situation that is pleasant to imagine but that is unattainable or impractical.  It is also the slogan for a marketing campaign of the New York-based airline JetBlue. The idiom may be quite apt for the campaign.

The airline teamed up with an iconic New York restaurant, Patsy’s Pizzeria, to fly its pizzas from JFK to LAX.  For several days in May 2018, the carrier offered 350 people a day in Los Angeles the opportunity to get a 16” cheese pizza for $12 or a pepperoni pizza for $15 from the East Harlem institution.  The airline covered taxes, delivery fees, and tips.

Patsy’s Pizzeria has been serving coal-fired pizzas since Italian immigrants Pasquale “Patsy” Lancieri and wife Carmella opened the pizzeria in 1933.  (See the post, The Story of Pizza in America,from September 1, 2016.)  Patsy’s is in the Pizza Hall of Fame.  JetBlue made

an introductory video, starring Spike Lee alongside current Patsy owner Frank Brija, to educate viewers on the proper etiquette of consuming New York pizza: use hands instead of utensils, fold the slice in half, and share with a friend.

But why fly pizza cross-country when Southern California has excellent pizzerias, including many that serve New York “style” pizza?  After all, delivery time is more like 6 hours, not 30 minutes.  It couldn’t possibly be fresh and hot.  (JetBlue says it consulted a specially trained pizza chef to ensure freshness and food safety throughout the trip.)

Since Santa Barbara is outside the delivery area for “Pie in the Sky”, a local journalist placed his order online and headed south

to a hotel in LA to receive his cheese pizza. The original delivery window was 7 to 10 pm, which was later updated to between 8 and 9 pm.  About 9:10 pm, the pizza arrived– but it was a pepperoni—and it was cold—and the crust was soggy.  A half hour later, a new pizza box arrived, and an authentic, hot, New York cheese pizza emerged— the tomato sauce was light, the cheese was nicely browned in places, and the hand-tossed crust was both crispy and chewy, perfect for folding.They say that the key

to New York pizza is the water.  While Jet Blue’s “Pie in the Sky” experiment might be a good example of “pie in the sky,” people on social media are offering delivery ideas for other iconic New York favorites, including cheesecake.  At the top of the list is bagels, whose secret I am told is also in the water.

1 Response to “Pie in the Sky”