If Dante had been born in Sicily…

From a linguistic point of view, the national language and Italian dialects have the same

noble origin, that is, Latin.  It is a mistake to think that dialects are a corruption of Italian.   It is true that each has a specific role:  One is a language of communication within the entire Italian Republic; dialects have a more limited use within families and friends, or among people within a smaller geographic area.

History influenced all regions and therefore all dialects.   Invasions, wars, and social and political developments shaped the dialects.  Some remained a means of communication among the inhabitants of a certain area, while others produced literary documents.  For example, Sicilian in the twelfth century produced a great poetical school, the first in Italy.

(1313-1375, born in Certaldo near Florence), who are considered the fathers of Italian literature.  These authors began to write in their Tuscan dialect.  As it gained a prominent position over other dialects, other

authors who wanted to be read and listened to by as many people as possible were obliged to know and use this language.   For example, the great Italian writer Alessandro Manzoni (1785-1873), author of “The Betrothed,” was born in Milan but traveled to Florence to improve his writing skills.

Manzoni became a symbol of Italian “Risorgimento.”  Hence, from a

prevalent literary language, Tuscan was adopted as the “official” language of the country at the time of the Unification of Italy (1861).  But it happened naturally.  There was no political or religious authority that imposed Tuscan as the national language.  In France, the language was established by law, and in England, the choice was political—the dialect of the royal family became the national language.

Of course, over time, every language changes.  New words are added to the Oxford English Dictionary every year.  Despite the protests of purists, standard Italian has also been progressively affected by other Italian parlances, in terms of vocabulary, syntax, and pronunciation.  The greatest influence over the past 50+ years has been television.  From its introduction in the 1950s, people went to bars to watch and listen to television, which became like a language school.  Then in the 1960s people began to purchase television sets for their homes.  For better or for worse, the television was the social invention that united the country linguistically.

Yet Italy today has more dialects per square hectare than other countries.  This is because political unity was achieved late compared to, for example, France and England.  Cities like Turin, Milan, Bergamo, Venice, and Padua had throughout history completely autonomous political and social affairs, which produced a different evolution in their dialects.  So even today not only does every region (there are 20) possess its own specific dialect, but also there are differences within a single city. 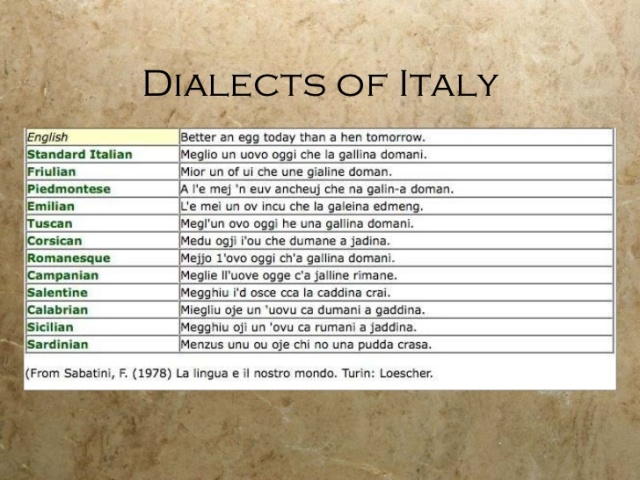 For example, the Ligurian dialect is not only different from the dialect in the Piedmont region, but the dialect spoken in Genoa is different from the ones spoken in Imperia and La Spezia (other cities in Liguria).  Of course, the dialects from distant regions in the north and the south are very different.  For example, there are more similarities between Piedmontese and French than between Piedmontese and Calabrese; one says buchèt, similar to bouquet, instead of standard Italian mazzo, in Piedmont, whereas Calabrese retains traces of ancient Greek.  In fact, my teacher Eva, who originally comes from Calabria, said that when she goes to Greece and speaks her dialect, she can be understood—more or less.