Music from the Holocaust

Posted on September 3, 2020 by babbityjean

t was 1988 when Francesco Lotoro, a pianist and composer from Barletta in Puglia, first heard about the music composed in the death camps.  He felt that the music should be heard, and he embarked on a very ambitious project to collect as much as he could find.  More than 30 years later, he is building a citadel, which is known formally as the Istituto di Letteratura Musicale Concentrazionaria—to house and play the more than 8,000 works he has collected and catalogued.

Lotoro has been all over the world and has found symphonies, operas, folk songs, and many other genres.  On a visit to Prague in 1990, he discovered a five-act fairy tale opera, “Three Hairs of the Wise Old Man,” by Rudolf Karel, a Czech composer.  Karel wrote the opera with medicinal charcoal (to treat dysentery) on sheets of toilet paper, which were later smuggled out of the camp in laundry sacks.  Karel died at Terezin Theresienstadt just north of Prague, a camp the Nazis had set up as a model community to try to trick the world, through propaganda films, that they were treating the Jews humanely.

Other prisoners wrote their music on food wrappers, potato sacks, newsprint or whatever they could find.  It was a testament to their resourcefulness, but also to their need for 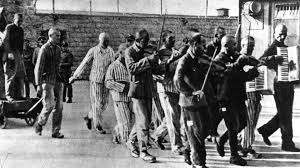 music to soothe the soul, to escape, to remember their former lives, and to comment on their experiences.  Being in an orchestra in a concentration camp saved some lives, but the experience was often humiliating.  Musicians were forced to play “command music” as prisoners were marched off to forced labor, and they also were forced to play concerts for SS officers and visiting “dignitaries.”  But when the prisoners played music on their own initiative, it gave them consolation and hope.

Other musicians and historians have joined in Lotoro’s passion to preserve the musical history of the Holocaust.  Some are staging performances, while others are searching for music banned by the Nazis as “degenerate,” much of which was composed by Jews.  Also expanding is the search for musical instruments, books about music, and original or 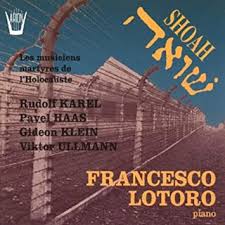 printed scores stolen by the Nazis.

But Lotoro’s vision is perhaps the broadest.  He has also arranged and recorded works composed in the camps.  In some cases, he is writing music to finish incomplete works.  Even his collection has expanded to include works from political and religious prisoners in many countries and from musicians of any national, social or religious background.

Lotoro’s citadel – Istituto di Letteratura Musicale Concentrazionaria — will include a museum, a library and a theater at a cost of about $45 million.  The city of Barletta donated a two-acre site of an abandoned brandy distillery and

is also providing an additional $2.7 million for the construction of a 30-room hotel nearby for students, scholars and others to study the music.  The Italian government has provided $5 million in funds so far, and Lotoro is hopeful of receiving up to $36 million more.  He is also raising money through an international fund-raising campaign.

Helping him on this project is his wife Grazia.  Raised Catholic, they converted to Judaism in 2004.  Then Francesco discovered that his grandfather’s grandfather was Jewish and had converted to Christianity because it was difficult to be a Jew at that time in Barletta.  For this modest musician who has lived in this small Adriatic town all his life, the completion of the citadel will be a lifetime dream to leave a musical legacy.

1 Response to Music from the Holocaust