Many weeks ago, I wrote this post, in which I described Ennio Morricone as “a living legend.”  On July 6, 2020, he died in Rome where he was born and lived.  He will remain a legend, and his music will live on.

They were born in Rome in the late 1920s, only three months apart.  Both had fathers in professions that would become their chosen fields, and who became their first teachers.  Neither spoke much English despite their popularity in the English-speaking world.  For a brief period, they were classmates in the same school together.  Sergio Leone and Ennio Morricone eventually formed one of the best-known and exemplary collaborations between a film director and a composer in film history. 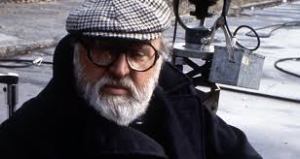 Leone began his career as an assistant to director Vittorio de Sica during the production of Bicycle Thieves in 1948.  He went on to direct epics, such as The Last Days of Pompeii and The Colossus of Rhodes.  Later, Leone turned down the offer to direct The Godfather in favor of working on a gangster story that would eventually become his masterpiece.  In the mid-60s, as audiences lost interest in historical epics, Leone turned to a genre that had intrigued him since childhood:  the American Western.

From an early age, Morricone played several instruments, most notably the trumpet.  He wrote his first compositions when he was only six years old.  As he matured, he wrote music for the theatre, as well as classical music for voice and piano.  Then he started writing and arranging music for films as a ghost writer.  Although he composed music for some Western movies, it was his arrangement of an American folk song that captured Leone’s attention.

The turning points in the careers of both Leone and Morricone came in the mid 1960s with their collaboration on A Fistful of Dollars, followed by For a Few Dollars More, and The Good, the Bad and the Ugly. The trilogy became known as the Dollars Trilogy and also as the Man With No Name Trilogy.  Each film became more financially successful and more technically accomplished than its predecessor, and each artist contributed lasting innovations to the genre. 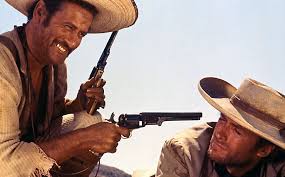 Leone redefined the Western in plot, characterization and mood, and the American cowboy in appearance, character and motivation.  Gone are the handsome, beautifully dressed men in white hats for heroes and black hats for villains.  Leone’s characters are more realistic and complex—often “lone wolves” who are morally ambiguous.  Relationships revolved around money, power and retribution.  Violence was rampant.  Leone’s cinematography is

stunning:  He often juxtaposed close-up shots of dirty, unshaven, menacing faces with lengthy long shots of the beautiful, albeit barren, land and settings of the Old West, together with beautifully framed interior shots.

Instead of orchestral arrangements that had been used in previous Westerns, Morricone used gunshots, cracking whips, whistle, voices, Jew’s harp, trumpet, and the then-new electric guitar.  His special effects punctuated the action and contributed to its visceral effect.  For Leone, the eclectic and poignant music was a protagonist in his films.  It was said that he kept scenes going because he did not want the music to end, which probably contributed to somewhat long, slow films. 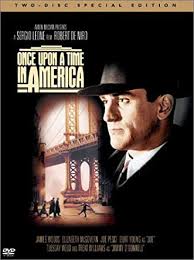 After the Dollars Trilogy, Leone and Morricone collaborated on what became known as the Once Upon a Time Trilogy.  Morricone’s score for the first, Once Upon a Time in the West, is one of the best-selling original instrumental scores in the world today.  The third, Once Upon a Time in America, is Leone’s brilliant masterpiece.  Starring Robert de Niro, it is the story of gangsters and friendship in Manhattan in the years of American prohibition.

Leone died five years later in 1989 at the age of 60, ending the relationship between the two artists. Morricone went on to collaborate with many other directors, including Brian De Palma (The Untouchables), Giuseppe Tornatore (Cinema Paradiso), and Franco Zeffirelli (Hamlet).  But this “living

legend”, who has composed more than 400 scores for film and television, is probably best known for the variety of genres in his repertoire, which includes choral work, romantic themes, jazz, and the melodies of Africa.  He received seven Academy Award nominations for his film scores.  Finally, perhaps long overdue, Morricone was awarded the Best Original Music Score in 2016 for Quentin Tarantino’s The Hateful Eight.