The King of Cheeses

Among the 10 Commandments of Italian cooking are:  Never put cream in Carbonara sauce; never put pineapple on pizza; and never put cheese on a fish dish.  The laws are

constantly challenged by foreigners and are met with a range of reactions from Italian chefs.  A recent incident exploded on social media and in European tabloids after the owner of a traditional Italian restaurant in London “chased” a customer from his establishment for having the gall to ask for parmesan on his crab ravioli.

Even the official consortium of Parmigiano Reggiano entered the debate: “Who says you NEVER put parmesan on fish?  It is a myth to debunk.” Customers’ tastes and chefs’ desires to experiment have evolved over time.  “The great chefs use the king of cheeses

combining it with fruit and vegetables, to embellish meat and fish, and even to prepare tasty desserts.”  Some chefs say that you cannot generalize:  Not all parmesan has the same flavor notes and it is up to the chef’s talent to choose the most suitable ones for different combinations of taste.  The consortium continues:  “A young 12-month-old Parmigiano Reggiano—delicate, with hints of milk, yogurt and fresh fruit—is perfect to enrich salads and combine with a sparkling white wine; a 36-month-old Parmigiano has a stronger taste—with notes of spices, dried fruit and meat broth—and is ideal for stuffed pasta, or to be enjoyed at the end of a meal with fruit and honey, accompanied by Marsala or even a Trentino grappa.”

While the use of Parmigiano Reggiano has changed over time, the way it is made is a hymn to tradition. It is not industrially manufactured; rather it is made only by the expert hands and under the watchful eyes of cheesemakers using the same artigianale methods passed down since the 13thcentury.  Traditionally, it is made from cow’s milk in the provinces of Parma, Reggio Emilio, Bologna and Modena; cows are fed only grass or hay. Starter whey and calf rennet are added, and following several procedures, the cheese is put into stainless steel rounds that are pulled tight with a spring-powered buckle (a touch of modernity).  After a day or two, the buckle is released and a plastic belt imprinted with the Parmigiano Reggiano name, the plant number, and month and year of production is put around the cheese and the metal form is buckled tight 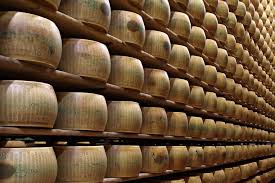 again.  The wheel is then put in a brine bath to absorb salt, the only additive in the process.  The wheels are transferred to aging rooms and placed on wooden shelves that can be 24 cheeses high by 90 cheeses long, or 2,160 total wheels per aisle. The average wheel is 7-9 inches high, 16-18 inches in diameter, and weighs about 84 pounds.

After 12 months, the Parmigiano-Reggiano Consortium inspects each wheel.  A master grader taps the wheel to identify any cracks or voids. Wheels that pass are heat branded on

the rind with the Consortium’s logo.  Wheels can then be aged further.  Founded in 1928, the Consortium sets and enforces standards for making the cheese, and all producers belong to it.  As of 2017 about 3.6 million wheels are produced annually; they use about 18% of all the milk produced in Italy.

The European Union has designated Parmigiano Reggiano (from the specified provinces) as a DOP (protected designation of origin).  Outside the EU, the name “Parmesan” can legally be used; however, there are many deceptive and ambiguous practices that make

products made elsewhere appear to be Made in Italy.  According to Coldiretti, the major organization representing agricultural interests in Italy and the European Union, these deceptive practices begin with the United States and with Parmigiano Reggiano.  So highly regarded is this cheese that even in Italy the Mafia has hijacked delivery trucks on the Autostrada A1 between Milan and Bologna. Between 2013 and 2015, organized crime stole 2039 wheels from Italian warehouses.

Perhaps theft and deception should be the real tabús.  Putting the king of cheeses on fish dishes seems far less heretical.