restaurant in 2009, the staff was shocked when she asked for a doggy bag for the leftovers.  While this is a common practice in the United States, it is still considered a taboo in Italy and much of Europe.  In the U.K., it is more common but it is usually done with a dose of British embarrassment.  In Spain and Italy, people might take bones from their meat to give to their dog, but culturally it just isn’t done.  To be fair, portion sizes in restaurants are smaller and often there aren’t leftovers.

According to a survey by Coldiretti, the Italian farmer’s association, one in four Italians believe the idea of taking home remnants of their dinners is a sign of poverty, bad manners, and even vulgarity.  But times are changing.  First, France passed a law in 2016 that bans supermarkets from throwing away food.  They must either give it to charity, or, if no longer edible for humans, make it available for animal feed, compost, or bioenergy.  There are stiff fines if they do not comply.

Six months later, Italy passed a law that “encourages” restaurants to give people doggy bags, and removes legal hurdles for companies that wish to donate food.  Foods may now be donated after their expiration date, or if they have been mislabeled (but are still safe).  The costs have been eliminated for farmers who want to give food directly to charities, and they will receive tax breaks for their donations.

Unlike the French law with its mandates and fines, the Italian law relies on altruism and incentives.  Will Italy manage a cultural shift in something as important to Italians as food,

and will incentives make the industry waste less?  Food waste is now on the international agenda, but it must become culturally unacceptable to waste food and to serve huge portions in restaurants.  Current estimates range from $13 to $16 billion of food waste in Italy annually.  The law provides $11 million to launch a promotional campaign, but only $1.1 million to fund innovation in using food waste.

For starters, a doggy bag is called a “family bag” in Italy to help destigmatize the practice.  And now several high-profile chefs are championing the cause.  Michelin star chef, Matteo Baronetto, from Turin’s historic Del Cambio restaurant, said in an interview that there should be no shame in requesting food for home.  “There’s no scandal, quite the opposite…it’s the client’s choice and it’s his meal since he has paid for it.”   Bruno Barbieri, a MasterChef on Italian television, goes one step further

calling it “cool” to ask for a doggy (or family) bag.  “I want to say to my clients, if you ask to take home the food that I have prepared, you are giving me a gift.  It means you liked it but for some reason couldn’t manage to finish it…. For those who cook this request is gratifying, not degrading.”  And in his kitchen, nothing is wasted: “For example, bread left in the basket of clients is used to prepare the lunch for the brigade, the wine of open bottles we use for softening the risotto.  Or we drink it at the end of the food service.”

One of the most vocal advocates on the issue is Massimo Bottura, who was recently named the best chef in the world.  During the Milan Expo in 2015, he opened an experimental soup kitchen with a Catholic charity that used food that had been left over from the exhibition as part of a campaign to raise awareness about food waste.  During the Olympic Games in Rio, he set up an “anti-waste” kitchen and cafeteria to feed people who live in Rio’s slums. 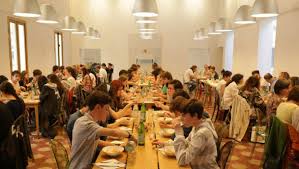 Santa Barbara’s 2017 International Film Festival showed the documentary, “Theater of Life,” which is about the Refettorio Ambrosiano, Bottura’s soup kitchen in Milan where in 2015 he invited 60 of the world’s best chefs to join him to cook for refugees and the homeless of Milan.  As Bottura says, “chefs can no longer cook for just the elite ignoring the ethical issues about feeding the planet.” 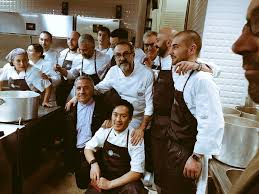