Why Monopoly is becoming a hit in Italy

The board game, Monopoly, quite popular in the United States decades ago, has been sold in Italy since 1935 (see the post from April 2015).  In 2011, to honor 150 years of Italian unification, an anniversary edition was published based on online voting for the cities that would be represented.  The results were surprising.  The largest cities, like Rome, Bologna, Venice, and Florence didn’t make the cut.  Most of the cities chosen were capitals of provinces.

Perhaps what is even more surprising is the popularity of a board game in a digital era that is dominated by video games.  In fact, the famous game in a box is having a resurgence.  Like the anniversary edition, new editions highlight local cities.  Leading the way in 2005 was an artist from Livorno with a new game, “Livornopoli,” that is set in the Tuscan town where one moves, for example, from the Piazza delle Carrozze to the via del Littorale. 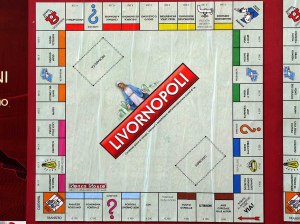 Then one evening a group of friends from Turin, almost as a joke, thought it would be fun to have an edition set in their city.  They followed their intuition and in no time their idea became a reality.  Torinopoli is a tribute to everything about their city:  the classic characters, their proverbs in dialect, their habits and traditions, and, naturally, their streets, monuments, and neighborhoods. 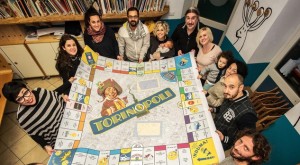 But even more interesting is the way that these young folks financed the production of the game.  First, they used a crowdfuning platform, called “Produzione dal basso” to raise funds.  Then, they convinced various local businesses to sponsor the project in exchange for a place on the game board. 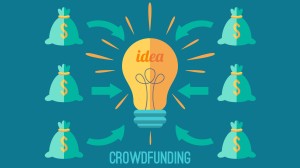 The success was overwhelming.  Launched at the end of 2016, there were 3,000 boxes in the first edition.  Torinopoli sold out in a few days.  The game had become the most coveted gift for Christmas that year.  Moreover, the entrepreneurs had collected 20,000 euros from the crowdfunding site compared to an initial request for 5,000!  Now, the group of friends is organizing a new campaign for the second edition, which has already collected 40,000 euros in a little more than a month.  Livornopoli also was a success, and the creator has decided to reprint the game but this time engaging the power of collective financing through the web.

Motivated by pride and love of their cities, other ingenious people throughout Italy are following this example.  Coming soon are Romanopoli and Pesaropoli, while Palermopoli and Bolognopoli are on the horizon.  Perhaps in the future we will also have Veneziopoli, Firenzopoli, and Milanopoli.  But above all, we hope to see a version from the citizens of Monopoli, a gorgeous city along the coast in the province of Bari. 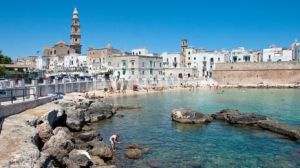 1 Response to Why Monopoly is becoming a hit in Italy