In Italy there are different types of eating establishments—namely, restaurants, trattorias, and osterias.  The differences today don’t mean as much as in the past, as many trattorias and even restaurants today call themselves osterias, and vice versa.  And the evolution continues with the advent of agritourism and the Slow Food Movement.

The osteria, or inn, was developed between the First and Second World Wars.  In these taverns shelter was needed, a few tables, lots of wine, and very little food.  Until the 1960s, only a few hot dishes were offered, such as a pot of boiled tripe or minestrone.  Over time, they served simple meals.  Usually there was no menu and the offerings changed daily, according to the local market.  Over time, two or three courses might be offered at a fixed price, including wine.

Trattorias evolved between the 60s and 80s and offered more options than osterias.  Traditionally, they were family-owned, casual, and rustic places that served fresh, unassuming, and conventional local food at reasonable prices.  Restaurants, on the other hand, 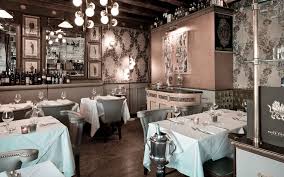 traditionally offer complete meals or à la carte dishes presented on a printed menu with fixed prices.  Some have a host or hostess, a sommelier and a professional kitchen staff, although not all are the same.

As the distinction between these types of restaurants have blurred, according to the guide, Osterie d’Italia 2019, at least four different types of “trattorias” have emerged: traditional, modern, agritourism, and traditional restaurant.  In the traditional trattoria, the focus is on the raw ingredients whose origin is strictly local.  The dishes are handed down from generation to generation.  The tables are managed in an informal and simple way, in many cases by family members divided between the kitchen and tables.  The modern trattoria

might have minimalist furniture and it might have a more updated look without checkered tablecloths and plates or peasant tools on the walls.  But more importantly, its dishes tend to rethink traditional dishes with a modern touch and an unusual presentation.  These places are often run by young people, most often long-time friends with a passion for wine, who are trying to reshape history in a contemporary way. 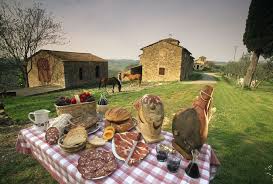 Traditional restaurants usually are more elegant with more service formalities.  In general, their dishes reflect tradition while attempting to keep in step with the times.  The agritourism sector is a model on the rise.  The idea here is to serve dishes prepared with vegetables cultivated, cheeses produced, and meat raised just a few meters from one’s table.  The cuisine is more or less rigorously linked to tradition.  On the table, risotto, lasagna, soup, baked goose or roast kid might arrive, as well as a rich selection of cold cuts and cheeses to try. 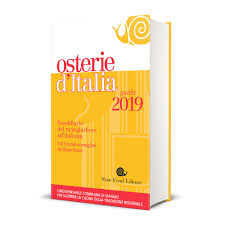 According to the Osteria guide, the best establishments share the same qualities including:  a welcome and convivial environment; fair value for money; use of local products whenever possible; and knowledge of how to pair wines, even the house wine.  The guide lists

1,617 osterias or trattorias, and the best ones are indicated by the snail symbol of the Slow Food Movement (SFM).  In 1986, an Italian food and wine journalist Carlo Petrini started the SFM.  He was haunted by the spectre of fast food companies eroding Italy’s ancient culinary culture.  The opening of McDonald’s on the Spanish Steps in Rome was the last straw.  Today the snail symbol is a prestigious badge of honor for Italy’s best trattorias.