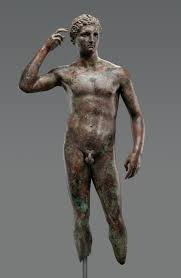 I have written several posts about a favorite topic—art, stolen art, repatriated art, and the thorny questions surrounding who “owns” the patrimony of the art world.  Now a new controversy has emerged…again between Italy and the United States.  Actually, it’s not new…it’s been an ongoing controversy between the Italian government and the J. Paul Getty Museum in Los Angeles over what is now called the Getty bronze.

In 1977 the Getty Museum purchased a bronze statue called the “Victorious Athlete” from an antique dealer in Germany for $3.95 million.  It is a life-size athlete crowned with an olive wreath possibly by Lysippus, a Greek sculptor from the

4thcentury B.C.  (More recent scholarship has dated it to the second or third century B.C.) Life-size bronzes are very rare and this is one of the finest from the Classical era. It has been the centerpiece of the Greek and Roman antiquities collection at the museum in Malibu for the past 50 years.

Since 1989 Italy has asked the Getty to return the statue to Italy, and the Getty Museum has declined. Here’s the story.  The statue was probably fashioned in Greece and was lost at sea after being stolen by the Romans.  The bronze was retrieved from Adriatic waters by Italian fishermen in 1964. They realized the value of their discovery, brought it to shore in Fano (Le Marche), and buried it in a cabbage field, awaiting the right buyer.  The statue was sold several times after its discovery and may have been smuggled out of Italy illegally and hidden at various points in a bathtub and even in a convent.

Before the Getty purchased the bronze in 1977, it undertook a comprehensive, five-year effort to determine that the statue could be purchased legally and in good faith.  The

review included analysis of international, Italian, American, and California law, including the 1968 ruling by Italy’s highest court, the Court of Cassation, which stated that there was no evidence that this statue belonged to the Italian state.  In 1973, acting on a request from Italy, German police initiated an investigation into whether the German dealer had received stolen goods. The investigation was dropped for lack of evidence of wrongdoing.

Why then is Italy so insistent that the Victorious Athlete be returned to Italy?  In December 2018, the Court of Cassation decided that the museum must forfeit the bronze.  While there was no published ruling explaining the reasoning, Italy believes that the statue was found in Italian territorial waters and was illegally exported from Italy, conclusions that run contrary to the Court’s 1968 ruling. Italy also believes that the statue was culturally and administratively Italian when it sank.

The Getty, on the other hand, believes that the statue was retrieved from international waters, was created outside of Italy, and is not an Italian object subject to repatriation. Furthermore, the Getty maintains that it acted in good faith and relied on a decision of Italy’s highest court when it was purchased.  This case has dragged on for 10 years, and the battle isn’t over.

The Getty must also feel a little underappreciated.  In 2007, the Getty returned 40 works of art to Italy that may have been illegally acquired, including an enormous statue of Aphrodite (see “The Controversy over who owns the world’s art” post of October

millions of dollars in support of Italian cultural organizations.  In the case of the bronze, the Getty says it will continue to defend its legal right to the statue because the law and facts do not warrant restitution.

Respectable museums today do not retain works that were stolen or transferred in violation of international law.  Due diligence requires, at a minimum, documentation of where it was discovered in modern times and its subsequent movement across national borders. Applying these standards is not always easy.

1 Response to The “Getty” Bronze