Posted on November 1, 2018 by babbityjean 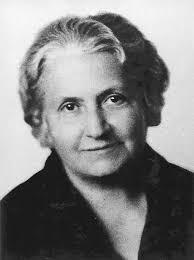 Maria Montessori was an Italian physician, educator, and innovator, acclaimed for her educational approach that mirrors and builds on the way children naturally learn.  Born in 1870 in Chiaravalle, in the province of Ancona in the Marche region of Italy, she was an avid learner who spent her childhood years in Rome, a paradise of libraries, museums, and good schools.  At the age of 13, she entered an all-boys technical institute to prepare for a career in engineering.  She soon changed her mind, and with great perseverance, she gained admission to the University of Rome’s medical program.  When she graduated with honors in 1896, she was among Italy’s first female physicians.

Maria focused on psychiatry in her early medical career.  She also developed an interest in education.  Her studies led her to question the prevailing methods of teaching children with intellectual and developmental disabilities.  In 1900 she was appointed co-director of a new training institute for special education teachers.  She approached her work scientifically, observing and experimenting with different teaching methods.  Many of the children advanced beyond expectations.

Then in 1907 she opened the first Casa dei Bambini, a quality learning environment for children in a poor inner-city district.  The kids misbehaved at first but soon showed interest in solving problems and working together.  Maria observed how they learned from their surroundings, essentially teaching themselves.  For the rest of her life, Maria advanced child-centered education.  She lectured widely, wrote books and articles, and developed teacher preparatory programs.  As a public figure, she also campaigned vigorously for women’s rights.  She was recognized in Italy and beyond as a leading feminist voice.

The Montessori Method then and now is based on self-directed activity, hands-on learning, and collaborative play.  In classrooms, children make choices and teachers give age-appropriate activities to guide them.  It is individualized education based on creativity and not on discipline or authority.

And the results are impressive based on studies that have been conducted.  Children who attend Montessori kindergartens, acquire more skills than other students.  They increase their ability to regulate impulses, to solve social problems, and to live better in groups.  They have a greater sense of justice and consider another person’s point of view. They have more confidence in dealing with difficult problems.  While children coming from poor families generally have worse results in school, Maria Montessori demonstrated that it is possible to increase the skills of those who are disadvantaged and to close the gap.

Montessori education has been adopted worldwide.  Today there are more than 22,000 Montessori schools in at least 110 countries.  However,in general, the name Montessori is not trademarked, copyrighted, or patented, and can be used by any school with any degree, or none, of certification or teacher training.

Here are some famous quotes from Maria Montessori:

“The greatest sign of success for a teacher…is to be able to say,

‘The children are now working as if I did not exist.’”

“Never help a child with a task at which he feels he can succeed.”

“Establishing lasting peace is the work of education; all politics can do is

keep us out of war.”