What Would the World Be Without Nutella?

That is the slogan (Che mondo sarebbe senza Nutella) for Nutella, the commercial name for a kind of spreadable cream of cocoa and hazelnuts made with sugar and palm oil.    It was created in 1964, and many Italian children grew up with it as a breakfast staple.  It has spread throughout the world and is enjoyed differently in many cultures today.  The history of Nutella is interesting — marked by innovation and clever marketing.

Nutella’s story begins with Pietro Ferrero who owned a bakery in Alba in the Piedmont region, an area known for the production of hazelnuts.  In post-war Italy chocolate was very expensive.  Pietro set out to make a chocolate treat for children that was affordable.  Pietro put chocolate and hazelnuts together to make a treat that he called  “gianduia.”  This was Nutella’s first ancestor.  Later it became a spread, which was called “supercrema.”

In 1963, Pietro’s son, Michele Ferrero, revamped Supercrema with the intention of

marketing it throughout Europe.  The recipe was modified and it was renamed Nutella.  The first jar of Nutella left the Ferrero factory in 1964, and it was an instant success.

Nutella was introduced in the United States around 1983 by students and soldiers who spent time in Europe.  They fell in love with the product and brought it back to America with them.  Then, the first Nutella factory opened in New Jersey, but it was small.  A large factory opened in Ontario, Canada in 2006 for the production of Nutella in North America.

Today there are 350,000 tons of Nutella produced annually in 11 factories throughout the world; 9 others are dedicated to Ferrero Rocher and Tic Tac.  It is probably the most widespread of its type in part because of how the Ferrero company has adjusted its marketing.  For example, they take advantage of social media:  Nutella is the second most liked food on Facebook, after Oreos.

In France, crepe day is celebrated in February.  That is when the most Nutella is sold in

France.  Muslims eat Nutella on bread after Ramadan.  And there is a shortage of Nutella in Australia because of its popularity as a doughnut filling.  In the United States, Nutella to Go (breadsticks 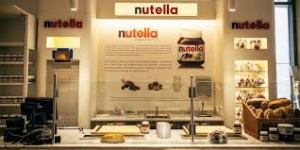 with Nutella) is the most sold product at the checkout line in Walmart’s.  In a more upscale environment, Nutella bars dedicated to crepes and pastries are opening in Eataly’s across America, first in Chicago, then in New York.  And at our house, desert pizzas are made for children with Nutella topped by blueberries, raspberries and bananas.

Back in Italy:  a Nutella anti-theft device was reported in the Italian newspaper in response to complaints of children and roommates stealing Nutella.  The block with a padlock sells on EBay for 9,99 euro.  “Non rubare la mia nutella!”

1 Response to What Would the World Be Without Nutella?