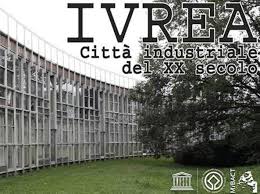 In 2018, UNESCO conferred World Heritage status on Ivrea, a city in the foothills of the Alps in the Piedmont region.  Known as the “Industrial City of the 20th Century,” Ivrea is about an hour by train north of Turin.  It was the home of Olivetti, a manufacturer of typewriters, accounting machines and calculators.

What set Ivrea and Olivetti apart was the vision of Adriano Olivetti (1901-1960), son of the founder, who was well-educated, humanistic, and had a strong interest in city planning, design and architecture.  His prior experience in a factory—in particular, the sense of 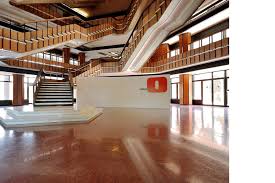 alienation and monotony from repeated action—led him to realize that it was important to free man from degrading drudgery.  He hired the best architects in the Modernist style to design the factories, housing, canteens, offices and study areas.  They were glorious, airy, light-filled spaces meant to give workers not only views of the mountains, but also a positive spirit and a sense of the future. 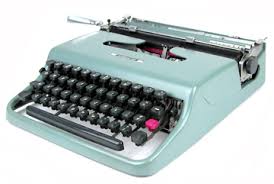 He also hired famous designers to work on his products; some of them, such as the 1949 Lettera 22 typewriter and the 1958 Elea 9003 mainframe computer, became icons of Italian design.  The portable Lettera 22 became the favorite of such American writers as Thomas Pynchon, Sylvia Plath, Gore Vidal and Cormac McCarthy.

Olivetti employees were treated well.  If they liked, they were housed in Olivetti-constructed homes and apartments. New mothers were granted 10 months of maternity leave, and children received free day care.  Employees were given the opportunity to take classes at on-site trade schools; the 30,000-volume library included new books and current magazines.  Lunchtime hours were filled with speeches and performances from visiting actors, musicians and poets.  The month of July was a holiday to allow workers in the surrounding countryside to tend to small farms.  And employees received substantial pensions upon retirement.

For a time, Ivrea was the most progressive and successful company town in the world representing a new form of corporate idealism.  In America, company towns like Pullman, Illinois arose as a result of low-wage workers lacking both rights and basic amenities like transportation.  The thinking at the time was that the more dependent an employee was on the company he worked for, the more control the company had.  Workers didn’t dare ask for sick leave or better health care; certainly, they didn’t go on strike. 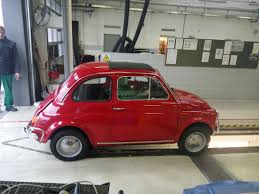 While many company towns were paternalistic, Ivrea was different…at least for a time. Olivetti became a principal player in the 20th-century “miracle” when Italy climbed out of the depths of fascism and World War II to become the eighth largest economy in the world.  The Italian economy peaked in the ‘60s when Fiat’s production headquarters in Turin became one of the largest car factories in Europe.  Olivetti was likewise a symbol of the “miracle.”

But by 1970 things were changing.  Adriano had died and his brother Roberto, who took over the company, lacked the same vision.  The world was moving from typewriters to electronic devices, and Olivetti’s success stalled in the transition. Olivetti’s brilliant chief computer programmer died in a car accident; conspiracy theorists attributed it to American secret agents who did not want computing advances falling into the hands of a country that was perpetually on the verge of Communism.  Technology and economic changes were stunting the growth of both Italian and American manufacturing towns:  recurring recessions forced cost cutting across all industries, labor was outsourced to cheaper countries, and companies like Fiat and Olivetti began laying off workers. 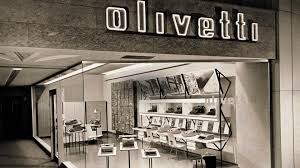 At its peak, Olivetti had more than 73,000 workers worldwide; today it has around 400.  Ivrea has lost a quarter of its population.  Seeing it today you would have no idea that it was the former capital of industrial design.  A former factory has been converted to a gym.  Only one of the office buildings is still in use.  There are placards pointing to a few landmark buildings, which have become monuments to a former utopia. 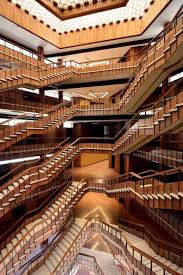 In its World Heritage designation, UNESCO said that Uvrea “expresses a modern vision of the relationship between industrial production and architecture.”  And in his book Città dell’Uomo (City of Man) published in 1960 weeks before he died, Adriano Olivetti called for urban development “on a human scale,” with the goal of “harmony between private life and public life, between work and the home, between centers of consumption and centers of production.”  Still laudable goals today.

3 Responses to Ivrea and Olivetti