Who Invented the Telephone?

American school children are taught that is was Alexander Graham Bell.  In fact, it was Antonio Meucci.  He was an interesting and prolific inventor who, unfortunately, had a tragic life.

Meucci was born in Florence in 1808.  He attended the Accademia di Bell’Arte where

he studied chemical and mechanical engineering, and electricity in particular.  He then worked at the Teatro della Pergola Opera House in Florence as a stage technician.  It was here that he met his future wife, Ester.  A young and dreamy romantic, Meucci found the beauty of the theatre to be quite inspirational.

In 1935 the couple emigrated to Havana, Cuba where Antonio became the Chief Engineer at the Great Tacón Theatre.  In Cuba he gained recognition as a scientific researcher and developer of new technologies. It was here that he conceived the first telephonic system in 1849 when Alexander Graham Bell was only 2 years old.

The lure of the “New World” enticed the couple to emigrate to the United States in 1850.  The lived the rest of their lives on Staten Island, New York, where Meucci continued his inventions, including smokeless candles. Ester became crippled with arthritis and was confined to an upstairs bedroom.  Meucci developed and installed a teletrofonic system, connecting Ester’s room to his small factory so that he could speak with her throughout the day.

Between 1850 and 1862, Meucci developed more than 30 different models of transmitting 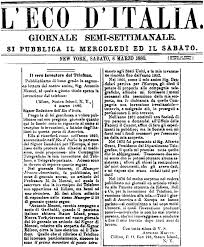 speech over vibrating electric currents.  He continued experimenting but he needed funding to make large-scale demonstrations of his revolutionary discoveries.  Prejudice prevented New York financiers from supporting him, so Meucci turned to Italy. In 1861 he performed a long-distance demonstration featuring a famous Italian opera singer, which brought much attention and was published in L’eco d’Italia, an Italian newspaper in New York.  Unfortunately, during Risorgimento, he was unable to attract the needed investments from Italy.

More tragedy followed. He became bankrupt due to trials against him by fraudulent collectors.  His Staten Island house was put up for auction; fortunately, the buyer allowed the couple to continue living there rent-free.  But in 1871 on the ferry from Manhattan to Staten Island, the steam engine exploded nearly killing him.  While he was in the hospital for months, his wife sold his teletrofono models to raise money to live on.

While recovering from his injuries, Meucci formed the Telettrofono Company.  But before he could bring his discovery to market, he needed a patent to protect himself legally.  He could not afford the $250 cost so he obtained a caveat (an official notice of intention to file a patent application) which could be renewed annually at the cost of $10.  Then in 1872 he went to the Western Union Telegraph Company of New York to ask for permission to test his telephone apparatus on the company’s telegraph lines. He provided a description of his prototype and a copy of the caveat; he repeatedly inquired about the status. Two years later he was informed that all of his materials had been lost.

In 1874 Meucci’s caveat expired and two years later Alexander Graham Bell, an employee in the Western Union laboratories, is granted a patent on the telephone. Meucci protested.  Lawsuits ensued.  Meucci had limited existing evidence to prove his priority of the electromagnetic telephone.  His models had been sold and then “lost” at Western Union.  The newspaper article in L’Eco d’Italia had been destroyed in a fire.  The judge in this trial, a well-known anti-immigration proponent, did not believe Meucci’s accounts and he lost the case.

Ove 100 years after Meucci’s death, the U.S. Congress passed a resolution in 2002 recognizing Meucci’s pioneering work on the telephone; it said that “if Meucci had been able to pay the $10 fee to maintain the caveat after 1874, no patent could have been issued to Bell.”

Today on Staten Island stands the Garibaldi-Meucci Museum in the former home of Antonio Meucci, the true inventor of the telephone.   He was a friend to Giuseppe Garibaldi,who had championed the unification of Italy. For over 50 years the museum’s mission has been to preserve the legacies of these men, and to promote understanding of the Italian-American heritage through cultural, artistic and educational programs and classes.  Admission to the museum is $10.

1 Response to Who Invented the Telephone?