The request for applicants read in part: “The person chosen must be responsible, reliable, honest, and will never feel alone in the company of cats.  And must have a heart of gold.”  God’s Little People Cat Rescue was looking for a person to care for about 55 cats for six months in Syros, a Greek Island in the Cyclades.  Almost 40,000 resumes were received from 83 different countries.

The association’s manager announced the choice: “We are 100 percent confident of our choice and we feel delighted and honored to introduce you to Jeffyne Telson, founder and president of ResQcats in Santa Barbara, California.  She has successfully run her own cat 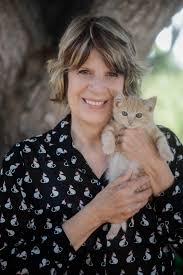 rescue since 1997 and is a force to be reckoned with for the rescue, care, and adoption of stray and abandoned cats and kittens.  Over the last 21 years she has rescued and found homes for almost 3,000 kittens and cats. I know she will bring a world of experience to our Greek rescue and I think the feeling is mutual when I say that I think we look forward to learning a lot from each other.”

Having personally met her, I know that Jeffyne (pronounced like Stephanie with a “J”) is a warm and dedicated force in

the animal rescue world of Santa Barbara.  Ordinarily, she uses the winter months to get rejuvenated at her home in Oregon, but this year she will go to Greece, and then return to Santa Barbara in the spring in time for kitten season.  She anticipates that part of her work in Greece will be easier than in Santa Barbara: “Taking care of 55 cats in an outside sanctuary [in Siros] is very different from taking care of 60 cats in an indoor shelter [Santa Barbara]” that have enclosures that need cleaning.  Furthermore, God’s Little People cats are adults rather than kittens and fewer of them are pregnant. 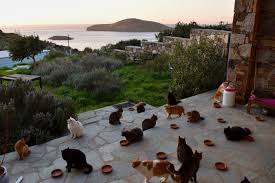 Spaying and neutering is “the core of any rescue” Jeffyne explains.  Because kittens can get pregnant at only 6 months of age, it is easy for stray cat populations to escalate out of control.  The Greek rescue chose Jeffyne in part due to her skills in treating cats with various conditions and her skills in medicating, administering fluids, and recognizing when a cat must be seen by a veterinarian.

In addition to a stipend, all expenses will be paid for Jeffyne’s six months on the island.  She will have food and garden lodging with a view of the sea. Besides caring for the cats on the Greek island, Jeffyne will try to expand the sanctuary to new locations, help with fundraising, and probably hardest of all, try to change people’s view of cats.  The local cultural attitude to cats is uncaring at best.  Too often they are treated like vermin.  But “if we treat animals well,” says Jeffyne, “we will start to treat people well too.” 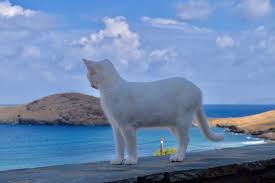 1 Response to Heart of Gold