Historical Records that Belong to Italy

(This post is adapted and translated from an article in Focus.it.)

Dating back to 1545, the botanical garden of Padua is considered the oldest in the world.  With more than 6,000 types of plants, it is still famous today for the cultivation of medical plants, from which many natural remedies are extracted.  Also cultivated here are poisonous plants and valuable plants, which thieves often try to steal.  Some historians attribute the first botanical garden to the one in Pisa, which was founded in the preceding year, but in another place than where it currently is.  In any case, the record is in Italy.

It is the Officina profumo-famaceutica of Santa Maria Novella in Florence.  Testimonies dating back to 1221 attest to how the Dominican friars in a part of their convent, now at the gates of Florence, dispensed distillates of curative herbs.  The current perfumery opened to the public in 1612.  Other European cities like Tallin in Estonia and Dubrovnik in Croatia claim to have the record, but the work of the Florentine pharmacy has never been interrupted.

Founded in 517 AC, the Biblioteca Capitolare of Verona celebrated 15 centuries in 2017.  It is the oldest library in the world open to the public since its inception.  There are more ancient libraries, like that in Alessandria, Egypt, but none has remained open to the public for as long as the library in Verona.  Here they studied the son of Charlemagne, Pipino, and then Dante Alighieri and Francesco Petrarch.  The library also houses the famous Veronese Indovinello, a puzzle from the eighth century that many scholars think contains the oldest text in the Italian vernacular. 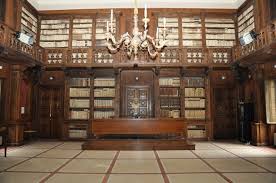 Founded in 1088, the University of Bologna has never ceased teaching.  Three popes, many businessmen, and various Italian politicians are among the famous graduates.  Even Oxford University, which was founded in 1096, is forced to cede primacy to Bologna, which has the nickname “the learned.”  The oldest educational institution in the world that is still functioning, however, is the University of Karueein, founded in 859, in Fez, Morocco.

It is the Monte dei Paschi of Siena in Tuscany, founded by the General Council of the Republic of Siena in 1472.  At the time, Siena was a republic and the bank was started to offer leans to the poor or needy.  Another record of the bank was reached in 1624 when the Grand Duke Ferdinand II de Medici laid the foundation of deposit protection systems that are used today to give confidence to savers in the world banking system.  For centuries, the bank has financed the local economy through businesses, charities, and of course the famous Palio di Siena.

According to the Guinness Book of World Records, the oldest wine cellar is located in Ferrara and opened in 1435.  At the time it was called Hostaria del Chiuchiolino from “ciuc,” which means drunk, but today it has changed its name.  Among its historic patrons were Titian, Copernicus, and Ariosto.

The Marinelli Foundry of Agnone in Molise is the oldest family business in Europe, and one of the oldest companies in the world still in operation.  It was founded in the year 1,000 and for generations has continued to produce bells in an artisanal way, just as it has done in antiquity. 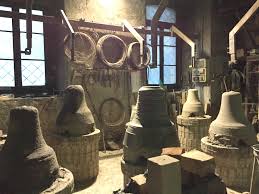 Perhaps.  It was discovered in Soleto in Puglia by a Belgian archaeologist from the University of Montpellier in 2003.  It is a fragment from a black earthenware vase that, according to estimates, was more than 2,500 years old and which was engraved with drawings and names of Italian cities in Greek and Messapian.  The representation depicts a coastal stretch of the Salento peninsula.  Some historians, however, have expressed doubts about its dating, because the cities are referred to as points as in modern maps and not with the typical houses of ancient maps.

Matera in Basilicata is known throughout the world as “the city of stones.”  It has cave-houses carved into the rock of a gorge created by the Gravina stream.  These cave dwellings are believed to be among the first human settlements in Italy, dating back to the Paleolithic era (about 9,000 years ago).  Since then, until the 1950s, the stones have always been inhabited, which makes Matera one of the oldest inhabited cites ever.