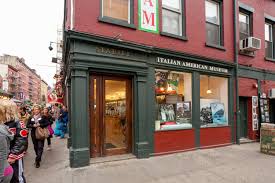 Founded in 2001, the Italian-American Museum is located in the heart of Little Italy in New York City, at the corner of Mulberry and Grand.  In the past, the building was a bank—La Banca Stabile—which was founded by Francesco Rosario Stabile in 1885.  In its

heyday, the bank offered much more than financial services; it was a community center for Italian immigrants that furnished telegraph services, arranged voyages on steamships, and served as a notary and post office.  Today you can still see the safes of the bank.

Through its exhibitions, the museum explores the rich heritage of Italy and of Italian-Americans.  You can appreciate their struggles in America and their successes in American life.  You see the shovels of the workers who constructed the subways and tunnels of New York.  There is a display that shows the work of Luigi del Bianco, the head engraver of Mount

Rushmore, who had the responsibility to refine the facial expressions of the 60-foot heads of the four presidents.  There is a registration card that Italian-Americans were required to carry during the second world war because they were considered “enemy aliens”—but only for less than a year.  And there are the contributions of two New York policemen:  At the end of 1800 and the beginning of 1900, Joseph Petrosino was a pioneer

in the fight against organized crime.  In the 60s and 70s, Frank

Serpico was the first to investigate widespread corruption in the New York City police department.  In 1973, the story became a film starring Al Pacino.

Today a beautiful cat accompanies visitors as they tour the museum.  His name is Massimo Massina and he wears a tricolore collar.

For exhibitions, conferences, festivals, etc, go to http://www.ItalianAmericanMuseum.org.  Many thanks for Daniella Day for her tour and answers to my many questions.

1 Response to The Italian-American Museum