Once upon a time…– A king! – my little readers will say immediately.

No, children, you are wrong.  Once upon a time, there was a piece of wood.

This is how the first episode of “The Story of a Puppet” began in 1881.  Originally published in serial form in one of the earliest Italian weekly magazines for children, Carlo Collodi’s “Le avventure di Pinocchio” or simply “Pinocchio” was eventually published in a book.

The story begins in Tuscany where a carpenter, who had planned to carve a block of wood

into a table, was frightened when the log shouts out.  He gives the wood to his neighbor Geppetto, a poor man who plans to make a living as a puppeteer.  As Geppetto carves the wood into a boy, the puppet instantly becomes mischievous.  After his feet are carved, he kicks Geppetto, steals his wig, and runs away.

Thus, the adventures—or misadventures—begin.  He gets into scrape after scrape—many are humiliating and some are violent.  At one point he is turned into a donkey; in another episode he is forced to live in a dog house, wear a collar with

spikes, and serve as a guard dog.  Mangiafuoco (literally, fire-eater, in Italian), the director of the Great Marionette Theatre, threatens to burn him as firewood but eventually releases him and gives the puppet five gold coins to give to Geppetto.  But then Pinocchio runs into the “lame” fox and the “blind” cat, the ultimate scammers.  They convince Pinocchio to plant his coins in the Field of Miracles where they will grow into a tree that will produce 2,000 gold pieces.  Needless to say, the poor puppet is deceived.

There are three mentors in Pinocchio’s life—the long-suffering and forgiving Geppetto, the Talking Cricket (il Grillo Parlante), who represents the voice of conscience, and The Fairy with Turquoise Hair (la Fata dai capelli turchini), who is maternal and caring.  Together they try to teach Pinocchio obedience, the value of school and hard work, and the need to make good decisions and to avoid life’s false temptations.  They also teach him that disaster is always a possibility.  For the most part, Pinocchio scoffs at the advice; he has to learn these lessons the hard way.

Collodi had undertaken journalism, both fiction and non-fiction, as a means of supporting Risorgimento in its struggle with the Austrian Empire.  The structure of the story of Pinocchio follows that of folk tales of peasants who venture out into the world but are naively unprepared for what they find, and sometimes get into difficult situations.  This was a serious problem at the time Collodi was writing, arising partly from the industrialization of Italy following unification.  The growing need for labor in the cities induced many folks to leave the fields and to venture into unknown places and conditions.

Originally, Collodi finished the story at chapter 15 when the puppet is hanged!  But by popular demand from the readers, Collodi continued the episodes in 1882.  The final book contains 36 chapters and has a much happier ending.  In the end, Pinocchio works hard to support Geppetto and gives away his hard-earned money to help the ailing Fairy.  That night he dreams that he is visited by the Fairy, who kisses him.  When he wakes up, he is a real boy at last. 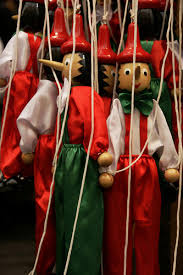 Collodi was a trailblazer in children’s literature.  His content and style were new, opening the way for many writers in the following century.  Pinocchio has had a huge impact on world culture.  It has inspired countless plays, movies and merchandising.  Most images of the puppet show the long liar’s nose; in fact, this is a rare occurrence in the Collodi story.  Perhaps it comes from the 1940 Disney animated film, which the Library of Congress deemed so culturally significant that it was selected for preservation in the United States National Film Registry.  Collodi’s masterpiece has been translated into more than 300 languages, which makes it the most translated non-religious book in the world…and the most widely read.

1 Response to A Classic