The Bridge that Spans Centuries

The Morandi Bridge in Genova collapsed in 2018, about 50 years after it was built.  Bridges, roads, and other infrastructure throughout Italy and the United States are in dire need of repair.  One bridge that was conceived more than 5 centuries ago does not need maintenance … because it was never built.

Sultan Bayezid II, ruler of the Ottoman Empire from 1481 to 1512, wanted to build a bridge to join the two banks of the Golden Horn, the estuary that divided Istanbul from the town of Galata.

As the primary inlet of the Bosphorus in Istanbul, the Golden Horn was a major urban waterway.  “Horn” refers to the inlet’s silhouette; “golden” refers either to the historic riches brought into the city through the bustling harbor or, more romantically, to the color of the water at sunset.

For a bridge of avant-garde engineering, the sultan wanted the best designers of the time.  During the Renaissance, it was (what is now) Italy, and it was Leonardo da Vinci.   The Turks had always maintained good relations with the Genoese because they dealt with them in business.  Istanbul and its strait were the link between Europe and Asia, a key passage in the trade routes in what was then the center of the world: the Mediterranean.  Leonardo was perhaps in Genoa at the time, or more likely was contacted by traders who operated between the maritime republic and the east. 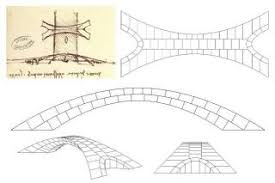 Leonardo answered the Sultan’s request.  But it wasn’t until 1952 that Leonardo’s remarkable letter was discovered in the State Archives at the Topkapi Museum in Istanbul.  In it he describes the bridge and includes sketches to represent it.  It was unlike anything that had been built at the time: It would have been the world’s longest bridge —280 meters (almost 920 feet); instead of multiple bays, it was a single span.  Leonardo assured the sultan in his letter that the bridge would be high enough that ships under full sail could pass under it.  However, for an unknown reason, Leonardo’s design was not approved.  The sultan also turned to Michelangelo without accepting his ideas either.

Leonardo’s drawings are currently displayed at the Museo della Scienza e della Tecnologia in Milan.  Recently, researchers at the Massachusetts Institute of Technology (MIT) wanted to examine whether Leonardo’s design would have been viable at the time.  MIT engineers studied his drawings, the materials he would have had available, and construction conditions in that era.  To test the viability of the bridge, they built a scale model, 80 centimeters long, using 3D blocks to assemble it.  And they tested the bridge’s stability by simulating earthquake conditions.

The team’s conclusion: “Leonardo knew what he was doing.”  They added, “it was incredibly ambitious…it was about 10 times longer than typical bridges of that time.” It was also quite sophisticated geometrically, with more curvature and three-dimensionality than typical arch bridges.  To stabilize the bridge against lateral sway and earthquakes, da Vinci designed the supportive abutments at either end to spread outward.  Although da Vinci did not specify the materials to be used, wood or brick would not have been practical.  Stone would have been the material to use for a bridge of such length, and the stones would have been fitted together without mortar.

The legacy of da Vinci’s project?  In 2001, a 100-yard version on Leonardo’s bridge was unveiled at Aas, south of Oslo, in Norway.  It is a pedestrian bridge over a motorway and was made of pine, teak and stainless steel.  According to the MIT engineers, “What we can learn from Leonardo da Vinci’s design is that the form of a structure is very important for its stability.  Not only is Leonardo’s design structurally stable, but the structure is the architecture.  It is important to understand this design because it is an example of how engineering and art are not independent from each other.”  They added, “We have now proven that his ideas on bridge design were well ahead of his time.  It is unlikely that it will ever be built for reasons of cost and practicality, but it could inspire future designers to dream big.”

Other posts on Leonardo da Vinci:

1 Response to The Bridge that Spans Centuries