The Church of San Giacomo in Chioggia (the Veneto) is the first in Italy to install a point-of-sale (POS) device in its inner sanctum.  Inspired by a precedent in Sweden, installation of the electronic station enables the faithful to use debit and credit cards to make their offerings.  The device is set in a white marble column not far from the entrance doors.  The

display gives three options: Candle, Mass or General offering.  A candle can cost one, two or three euros, although a more generous contribution can be made.  Holy Mass starts at 10 euros.  After the selection, the contributor swipes his or her ATM or credit card.

The transaction then triggers an email to the parish priest, Vincenzo Tosello, with the amount and the reason for the contribution.   The credit institution receives 8% on each transaction except on small amounts for which a commission of 30 cents is required. Monsignor Tosello believes that the commission is worth it because the new system was installed to counter continuous theft in the church.  Apparently, the offering boxes were easy targets for theft and deprive the church of a large part of its proceeds.

The electronic system, called Lumen, was created by a group of experts coordinated by the Pontifical Academy of Theology.  The system even allows the faithful to light a candle from home.  Through a dedicated website, the contributor can also choose the altar in front of which the candle will be lit.  The sanctuary then fulfills the request.

The technology has also come to the Duomo in Turin.  Named after St. John the Baptist, the Cathedral in the subalpine capital is one of the most visited churches by pilgrims and tourists from all over the world.  It houses the Shroud of Turin, the remains of the blessed 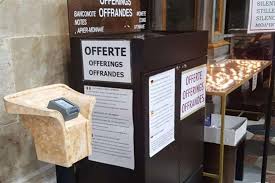 Pier Giorgio Frassati and, like all cathedrals, numerous works of arts.  Parish priest Don Carlo Franco explains: “Every day I saw people of all ages and backgrounds pausing in prayer and then wishing to light a candle or leave an offering.  But often they did not have coins or came from foreign countries where the use of the credit card is the norm.  I noticed that the pilgrims presented credit cards in the little shop in the cathedral even for objects that only cost a few euros.  I inquired with the banks and then I learned about the system in the church in Chioggia.  I decided to experiment in the cathedral of Turin for a period of one year”.

The cathedral installed two marble POS lecterns –one in front of the chapel that houses the Shroud and the other in the right aisle dedicated to Maria.  The experiment started in early August 2019 at the height of the tourist season.  So far, the new system has registered monthly average donations of more than a hundred euros.  “The new system will not replace the traditional bowls,” concludes don Franco, “but it should be seen as an additional opportunity for the faithful who wish to make an offer electronically, and with greater protection.  I think that if these POS systems were adopted in other churches, it would certainly reduce the risk of theft that unfortunately is perpetrated too often in the parishes”.

1 Response to Lighting a Candle