A Brief History of “Santa Lucia”

One of the most beautiful songs that we associate with Christmas is “Santa Lucia.”  It was a traditional Neapolitan song that was translated from dialect into Italian in the early stages (1850s) of the Risorgimento (the Unification of Italy).  It is the first Neapolitan song to be given Italian lyrics. It is a barcarola (from the Italian word, barca, for boat), which is a traditional folk song sung by Venetian gondoliers.  The lyrics of this song celebrate the picturesque waterfront district, Borgo Santa Lucia, in the Bay of Naples, as a boatman invites you to take a turn in his little boat, una barchetta, to enjoy the freshness and beauty of the evening on the sea. 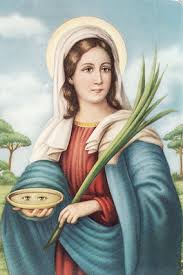 “Santa Lucia” probably became a seasonal song for two reasons: Saint Lucy was a Christian martyr, and her feast day is celebrated on December 13.  Her name shares a root (luc-) with the Latin word lux for light.  Many holiday songs blend pagan and religious traditions of celebrating light in the darkness of winter. Some versions of Lucia’s story in the fourth century say that during her persecution her eyes were removed, either by herself or by her tormentors.  Santa Lucia is the patron saint of the blind, as well as of authors, glaziers, laborers, martyrs, and peasants.  She is the patron saint of Siracusa (Syracuse) in Sicily and one of the patron saints of Perugia in Umbria.

“Santa Lucia” is sung in many languages throughout the world; for example, in Sweden, Finland, Denmark, and Norway, the song has been given various lyrics to accommodate to the darkest time of the year in the Scandinavian countries.  Perhaps the definitive 20thcentury recording of the Italian lyrics is by Enrico Caruso, the great Neapolitan opera singer. You can also hear Luciano Pavarotti, Mario Lanza and Andrea Bocelli on You Tube.  Even Elvis Presley has a recording in Italian! I don’t recommend Dean Martin’s on You Tube.

There are many versions of English lyrics.  Here is one from Wikipedia:

Now ‘neath the silver moon Ocean is glowing,
O’er the calm billows, soft winds are blowing.
Here balmy breezes blow, pure joys invite us,
And as we gently row, all things delight us.

When o’er the waters light winds are playing,
Thy spell can soothe us, all care allaying.
To thee sweet Napoli, what charms are given,
Where smiles creation, toil blest by heaven.

1 Response to A Brief History of “Santa Lucia”