Posted on September 7, 2017 by babbityjean

Lately the Italian newspapers have frequently reported on the boorish behavior of tourists to Bel Paese—those who urinate in the fountains, those who try to enter churches wearing only bikinis, and those who deface priceless historical monuments.  They are tourists from many countries (including Italy), not just “ugly Americans.”

Tour guides, too, have amassed some stunning questions and comments from tourists.  Here is a sampling from Rome: 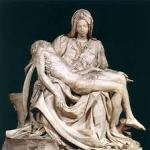 It’s easy to understand why tour guides can become a bit jaded.  Many are archaeologists and art historians who are passionate about their city and their work.  When they take foreigners to visit the monuments of Rome, they want them to understand the history of the masterpieces.  They want them to discover Imperial Rome, and to see the “Grande Bellezza” of Renaissance and Baroque art.  But the questions they receive make them feel that it’s all in vain.