Sant’Erasmus and Le Vignole are small islands in the Venetian

lagoon north of the Lido.  Sant’Erasmus was a port attached to Murano in the 8th century.  Today these islands are known as “island gardens.”  They supply Venice with their famous artichokes cooked in many styles.  They have sparse populations; most inhabitants are retired or work in agriculture.

Don Mario Sgorlon, 60 years, is the pastor of Sant’Erasmus.  Normally, during the Easter 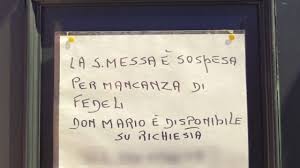 season, Italians flock to Venice and the islands.  But apparently neither the visitors nor the island inhabitants had the Resurrection on the top of their minds this Easter.  Therefore, Don Mario put up a sign on the door of his church in the hamlet of Le Vignole.  It read, “Mass is suspended for lack of believers.”  He added a note that Don Mario is available on request, along with his telephone number. 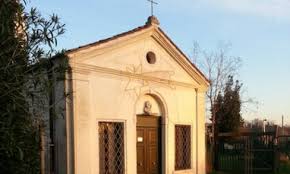 In this hamlet of about 40 residents, normally on Sunday at least a dozen people line the church pews.  But in the winter sometimes there isn’t anyone “because it’s cold, people get sick, and don’t leave the house.”  Don Mario seems resigned to the growing secularization in Italy.  To avoid being by himself at the altar, he put up the sign on the church door saying there would not be Mass.  “I’ve been a parish priest for more than 15 years and it has never happened that I was forced to close, but these are the times…When the faithful return, I’ll be here waiting for them.”

This entry was posted in Abitudini, English, Foto, Italia, Venezia. Bookmark the permalink.

1 Response to A Sign of the Times in Venice