Scandal…Italian style.  Over what else…a recipe.  True, it’s one of the most loved around the world:  pasta all’Amatriciana.

Carlo Cracco is a celebrity chef and host of the TV show, “There is mail for you.”  He dared

to say that in his sauce of this famous dish he also puts garlic (unpeeled).

A culinary mastershock. A sin. A heresy.  The Holy War of Amatriciano breaks out.  The response volley arrives immediately from the Mayor and entire administration of the city of Amatrice (province of Rieti, region of Lazio, near Rome), the birthplace of this famous recipe:  “The only

ingredients that comprise the true Amatriciana are guanciale, pecorino, vino bianco, pomodoro San Marzano, pepper and hot pepper.”  They say they are ready to pardon Cracco’s lapse and even invite him to make a pilgrimage to the sacred home of this dish, but not if he persists in calling his interpretation of the sauce, “amatriciana.”

Cracco’s response:  “I am sorry if I offended, but they clearly did not see the TV show.  Everyone knows that the original recipe does not call for garlic, but regional recipes evolve.  They are interpreted.  That’s how we live.  In this TV contest, we were not giving a lesson, but helping people to enjoy themselves, to do a little something dramatic….But I confirm:  garlic is one of these things you can put in the dish if you like it.  The intent of the other

evening was not to give the original recipe of Amatriciana.”

The leaders of the city and the press are not convinced.  How is it possible that an Italian chef can mistake a fundamental ingredient in one of the most famous pastas in the world?

So I did a little research on my own.  I consulted the chef who in my mind is the guru of classical Italian cuisine, Marcella Hazan, the “Julia Child” of Italian cooking.  Here is her recipe published in 1973: 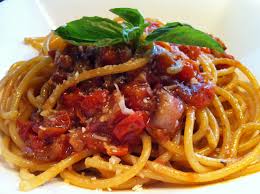 Perhaps Marcella was adapting the recipe for an American audience.  But she too would be considered a heretic!