The Nun of Monza

In I Promessi Sposi, Alessandro Manzoni calls her “Gertrude.”  Her given name at birth was Marianna de Leyva but she assumed her mother’s name, Virginia Maria, when she became a nun.  The story of her life — full of sex, scandal, power, money, and murder — was not only made into countless films and theatrical performances, but it also spawned a film subgenre called “Nunsploitation.”  These films, which peaked in Europe in the 1970s, typically involve Christian nuns living in convents during the Middle Ages. The story generally involves either a religious or sexual conflict, such as religious oppression or sexual suppression due to living in celibacy.

Marianna de Leyva was born in Milan in 1575.  Her father was the Earl of Monza and her mother was the daughter of a powerful Milanese banker.  Her mother died of the plague when Marianna was only one year old.  Although Marianna was destined to inherit a huge fortune, a series of intrigues managed to exclude her from her inheritance.  Entrusted to an aunt, she entered the monastery of Santa Margherita in Monza in 1591 assuming the baptismal name of her mother, Virginia Maria.  A contemporary writer described her as “modest,” “respectful,” and “obedient”; she made friends easily and enjoyed reading as much as possible.  She became a teacher at the convent’s school for girls.

In 1597 sister Virginia Maria met count Giovanni Paolo Osio, who lived in a house next to the monastery.  She began to exchange letters with Osio, delivered to his garden through a rope lowered from a window in the convent.   The liaison progressed and was facilitated by the use of counterfeit keys provided by a blacksmith.  Their meetings were organized with the complicity of other nuns and a priest, who was a close friend of Osio.

In 1602, Virginia Maria gave birth to a stillborn boy.  A year later she gave birth to a girl who subsequently lived with her father.  Within a few years one of the nuns at the convent threatened to expose the relationship. Osio killed her, apparently with the complicity of Sister Virginia and other nuns.  Virginia Maria threatened all the complicit nuns that they would suffer the same fate if they revealed the crime.  Osio also killed the blacksmith who had made the keys.

However, rumors about the convent became more frequent and came to the attention of the governor of Milan.  In 1607 Osio was arrested.  He subsequently escaped from prison and was later given a death sentence in absentia.  He was eventually murdered by an alleged friend.  When the archbishop learned of the scandal, he ordered a canonical trial of Sister Virginia.  She defended herself by claiming loss of free will, asserting that diabolic forces had caused irresistible impulses in her.  Torture was used on her and the priest who had facilitated the liaison.  Sister Virginia was sentenced to be walled-in for 13 years in the Home of Santa Valeria. She lived there until her death in 1650. 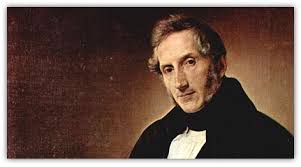 In his novel, Manzoni (1785-1873) gives a long and detailed psychological analysis of the figure of Gertrude as a victim of injustices and tyranny.  The story is told in flashbacks, which suggests an anguished secret in the nun’s life.  Manzoni also describes the sordid crimes of her lover Egidio (Osio), depicting the ruthlessness and vanity of the aristocratic world.  In the novel, Egidio pushes Gertrude to become an accomplice in the murder of a nun; this is her tormenting secret.  Manzoni’s view of Gertrude is as a weak tool of evil, unable to resist threats and temptations, but basically not cruel.  In the finale of I Promessi Sposi, Manzoni tells of the penance of Gertrude and her atonement.

2 Responses to The Nun of Monza