In 1610 Galileo was the first to spot Saturn through a telescope.  Later that century,

another Italian astronomer, Gian Domenico Cassini, discovered four of Saturn’s moons and the division of the planet’s rings.  Three hundred years later, the Italian Space Agency, together with NASA and the European Space Agency, sent an unmanned spacecraft to Saturn.

Named after the Italian astronomer, Cassini was launched in 1997 and arrived at Saturn in

2004.  Cassini, which has racked up 4 billion space miles, has been circling Saturn and its environs for the last 13 years.  This part of the universe has turned out to be stranger, more diverse, and more promising than predicted.  For example, the rings that have intrigued mankind for centuries are spidery threads of ice, rock, and dust shed by comets and meteorite collisions and then woven into iridescent braids, knots, and walls.

Cassini is the first to explore Titan, the largest of Saturn’s moons and the only moon in the

solar system with an atmosphere thicker than Earth’s.  Cassini’s Huygens probe landed in a frozen world of methane dunes and river beds.  Cassini has also discovered what many astronomers believe is the most likely place to find evidence of life beyond 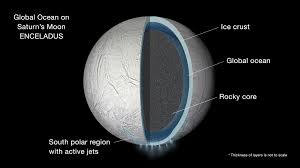 Earth…the mysterious moon Enceladus.  It is mostly water, a so-called “ocean world” that shoots plumes of salty water out of cracks in the ice of its surface.  The data has revealed the presence of hydrogen.

Now Cassini is in its final stages.  The spacecraft is on a new path—the narrow gap

between Saturn and its innermost ring.  It will penetrate this space 22 times before September 15, 2017 when it will crash into Saturn and be incinerated.  This swam dive will complete the successful joint mission of the American, Italian, and European space agencies.

This entry was posted in English, Foto, Italia, Lo Spazio. Bookmark the permalink.