The Mysteries of the Riace Bronzes

meters from the coast of Riace, at 8 meters deep, the diver first saw an arm.  He thought it belonged to a cadaver.  At that time, he did not know that this would be one of the most extraordinary archeological finds of the century.  And he certainly didn’t anticipate the mysteries that would follow.

Who were these two bronze youths retrieved from the water five days later by carabinieri scuba divers from Messina?  Where did they come from?  Who created them?  Were they smuggled statues that sunk in a ship wreck?  Many questions would emerge in the days and years following that have never been answered.  Here are some of the issues and theories. 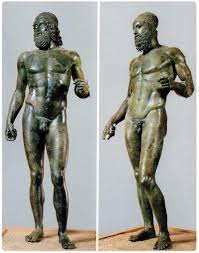 The two bronzes—at times called the Youth and the Adult—were “baptized” by the town in Calabria where they were brought ashore: Riace.  They are not twins and they are not the work of the same hand.  Whoever imagined them and defined their features by creating a wax model to make a clay mold in which to pour the molten bronze (the so-called lost wax casting) were two different artists.  Even today we do not know their names.

Because of the clay that remained inside the bronzes, experts today believe that they were created in Argos and Athens, in the workshops of the best artists of antiquity during the fifth century BC.  The Youth seems to be in the style called “Severe” between 480 and 450 BC.  The Adult seems to be in the Classical style, 30 years later.  There are many theories about the authors of these masterpieces.  According to some, Ageladas of Argos, a bronze artist from the School of Peloponnesus, created the Youth, while the Adult was the work of the more famous disciple of Ageladas, Polyclitus, with whom he wrote the Canon, defining for Renaissance artists and those who followed the geometric proportions with which to recreate beauty.  According to others, the first was the work of Phidias, the most extraordinary artist called by Pericles to create the Acropolis of Athens.  And the second was created by Alcamene, a student of Phidias.

Who or what do these bronzes represent?  Some art historians think that the haughty

attitude of the Youth is similar to that of Agamemnon.  The Adult is more mature, and the shell that covers the head is like the leather cap worn under the helmet by those in battle.  According to another theory, instead of two warriors, they could be a Greek and a trace (a type of gladiator).  We can surmise that they were holding a shield in the left hand, and, according to most hypotheses, a spear in the right, while on his head, leaning back as in moments of rest, they wore a Corinthian helmet.

But no one can say where the helmet, the spear, and the shields ended up.  Were they lost in a shipwreck?   Was there, in fact, a shipwreck?  Or did the ship that brought them dump them when the sea conditions made them an unbearable burden?  The backdrop of Riace, thoroughly explored only a year after the discovery, turned up nothing.  And where were the bronzes headed when they sank?  Most likely they started from Greece and were heading to Rome at a time when the Romans, seduced by the beauty that the Greeks created, sought to adorn their houses with art that they would have strived to reproduce in marble.  The Greek bronzes, in fact, were expensive, beautiful and unique, and countless have come to us only through marble reproductions.  There were times, too, in which the ignorance of such beauty led to the melting of the bronze to gain other things, notably weapons.

Beautiful bronzes are, in fact, rare in the world today.  But the Bronzes of Riace are now on display at the new National Archeological Museum of Reggio Calabria, which opened in April of 2016.

This entry was posted in Arte, English, Foto, Italia, Storia. Bookmark the permalink.

2 Responses to The Mysteries of the Riace Bronzes