Another Food Fight: This Time: Fish and Chips

First there was “Amatriciana-gate” when a celebrated Italian chef put garlic in the beloved pasta from Amatrice (see my previous post on this topic).   Then another famous Italian chef committed a crime when he put butter in his pesto pasta.  Now… a different type of food fight.

Fish and chips is one of the most well-known dishes in the Anglo-Saxon repertoire. 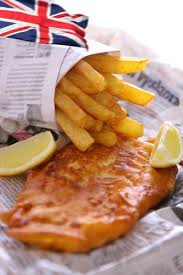 True?        Yes.  But where did it come from?  “It was brought to the United Kingdom by Venetian immigrants,” according to a theory told to students in Roman schools.

The English do not agree.  The headline in their newspaper, the Telegraph: “Italy claims the invention of fish and chips!”  As Queen Victoria would say, “we are not amused.” It would be like saying the tomato pasta was not Italian.  Fish and chips, that is, fish soaked in a dense batter and then fried, with fried potatoes (cut into little sticks, as the Italians say) has always been considered a typically English dish.

It all begins with a “European menu” introduced into the school refectories in Italy’s capital.  About 145,000 students were served 15 menus inspired by the same number of European countries.  Among them were croque

monsieur (France), fish and chips (Great Britain), goulash (Hungary), paella Valenciana (Spain), Wiener Schnitzel (Austria).  The goal was to promote gastronomic multiculturalism and to infuse in the kids a sense of belonging to the European Union.  Yet, in a description of fish and chips taught to the children, it was held that the dish could have originated in Italy.  To prove the case, Charles Dickens was cited in his novel Oliver Twist, which claimed that Venetian immigrants could have brought to the British Isles the classic combination of fried fish and potatoes.

Andrew Crook, treasurer of the National Federation of Fish Friers,

the association that manages more than 8,600 vendors of fried food throughout the United Kingdom, explained that he never heard of such a thing.  Officially in Great Britain, the Jewish immigrant Joseph Malin is considered the founder of the first “Fish ‘n’ Chips” store in the east end of London in 1860.

Although fish and chips was among the most popular dishes with the Roman students, the European menu project did not appear to meet with much success.  On the contrary.  It was attacked by many Italian mammas who didn’t mince words when they called it “garbage food.”  They collected signatures from an online petition that asked for the immediate removal of these “fatty, precooked, and fried” foods, and the substitution with healthier dishes at a nutritional level closer to Mediterranean cuisine.

I am not surprised.  It seems to me out of character for the Italians to claim fish and chips as one of their own…unless the fish is sautéed, the potatoes are roasted, and it is blessed with a more elegant name.  Any suggestions?

2 Responses to Another Food Fight: This Time: Fish and Chips